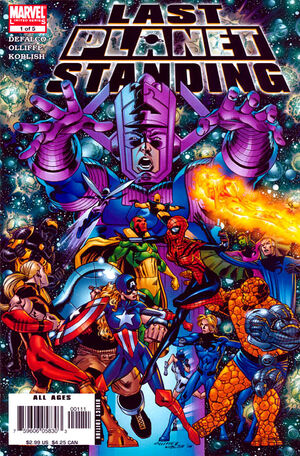 At last! The long awaited sequel to last year’s surprise hit, the sold-out LAST HERO STANDING, which Ray Tate of Silver Bullet Comics called “a comic book mini-series that’s worth buying!” For centuries beyond reckoning, Galactus has consumed entire worlds to satiate his never-ending quest for sustenance, but now he has a new plan--one which may threaten the very existence of the entire Universe! Featuring: the mighty Thor, the Warriors Three, the Avengers, Spider-Girl, the Fantastic Five and the Shi’ar Imperial Guard!