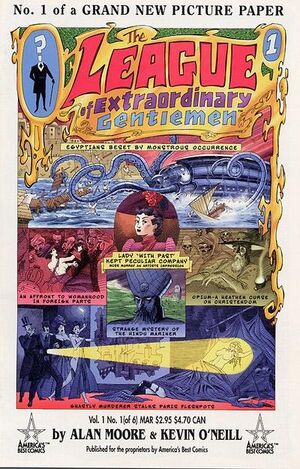 The British Empire has always encountered difficulty in distinguishing between its heroes and its monsters.

May, 1898
Mina Murray meets with Campion Bond at the cliffs of Dover in England. Bond wants Mina to be part of a British Secret Service task force in an effort to strike back at those would be enemies to the Empire. Bond wants her to be the caretaker of a new group of adventurers, that he intends on recruiting to his cause.

June, 1898
Mina travels to Cairo, Egypt where she finds the venerable adventurer, Allan Quatermain. Longed believed to be dead, Allan is advanced in years and a hopeless opium addict. However, he does maintain enough sobriety to save Mina from the advances of a few ill-mannered Egyptians. Mina succeeds in recruiting Allan to her cause. It is at this time that they meet their next partner, the Sikh misanthrope, Captain Nemo. Captain Nemo offers forth his custom designed futuristic submarine, the Nautilus as a temporary base of operations (Their actual headquarters, and the offices of Campion Bond are housed at the British Museum).

Later that month, Campion Bond sends them to Paris, France where they meet the aging detective Auguste Dupin. Dupin has knowledge of a bizarre rash of violence that has been occurring as of late, similar in scope to the Rue Morgue murders that he witnessed back in 1841. Mina, Allan and Dupin decide to investigate the recent criminal acts and flush out it perpetrator. Mina is the first to encounter the criminal who turns out to be none other than the mysterious Mister Edward Hyde. Hyde viciously attacks the group, grabbing Quartermain by the throat.

1889
Allan Quatermain travels to the dilapidated mansion of Lady Ragnall in England. He finds her maidservant Maria who escorts him to Ragnall's waiting room. Lady Ragnall is a recluse, whose life has been consumed from a psychotropic drug known as taduki. Quatermain has come to sample this rare hallucinogen. But upon experimentation, something goes horribly wrong. Marisa, the servant begins to scream.

Retrieved from "https://heykidscomics.fandom.com/wiki/League_of_Extraordinary_Gentlemen_Vol_1_1?oldid=1469568"
Community content is available under CC-BY-SA unless otherwise noted.