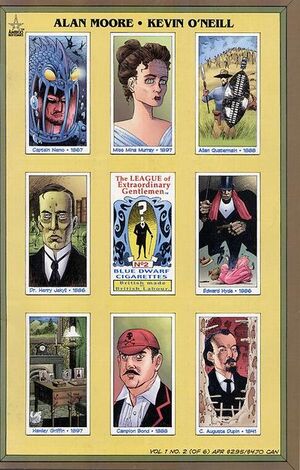 In six weeks, Mr. Bond, I have been almost killed on two occasions. If this affords delight to your monogrammatic superior, Mr. Mycroft Homes, then I am, as you may be sure, immensely comforted.

Appearing in "Ghosts of Miracles"Edit

Synopsis for "Ghosts of Miracles"Edit

June 28th, 1898
Allan Quatermain struggles to free himself from the grip of Edward Hyde. Auguste Dupin shoots Hyde's left ear off. Quatermain shoves a bottle of laudanum into his mouth causing him to pass out. They cart him to the Nautilus where they witness Hyde transforming into his alter ego, Henry Jekyll. They offer Jekyll a promise to cure his condition if he agrees to work with them.

July 3rd, 1898
Campion Bond sends the League to Miss Rosa Coote's Correctional Academy For Wayward Women to investigate three separate claims of immaculate conception. They discover that these unexplained pregnancies are the result of the actions of one Hawley Griffin, the Invisible Man. They expose Griffin and convince him to come with them.

July 5th, 1898
Back at the British Museum, Campion Bond introduces the League to Professor Selwyn Cavor. Cavor is the inventor of a mineral called Cavorite. Cavorite has anti-gravity properties that could be used to create airborne attack craft. But the Cavorite has been stolen, and Bond wants the League to retrieve it. Several references are made about Bond's superior, a mysterious figure named "M". Mina suspects that M is secretly Mycroft Holmes, the brother of London's infamous detective, Sherlock Holmes. Bond does not confirm nor deny Mina's assertion.

The League gathers together and ventures toward the Limehouse district. They are in search of an Asian crime lord who is suspected of being responsible for the Cavorite theft.

Allan Quatermain goes into a seizure from the effects of the taduki plant. Marisa begins frantically sobbing, trying to help him. From her personal exposure to taduki, she possesses the ability to stare through Allan's skin and see the bones and muscle beneath it. Allan finds his consciousness transported through time and space. He arrives on a strange, alien world outside of the normal flow of time. He meets fellow time-lost traveler John Carter, and his 20th century great-nephew Randolph Carter. The three of them bear witness to a strange, grotesque, horrifying monster. Suddenly there is a brilliant flash of light and a man known only as the Time Traveler appears.

Notes on "Allan And The Sundered Veil":

Retrieved from "https://heykidscomics.fandom.com/wiki/League_of_Extraordinary_Gentlemen_Vol_1_2?oldid=1469570"
Community content is available under CC-BY-SA unless otherwise noted.