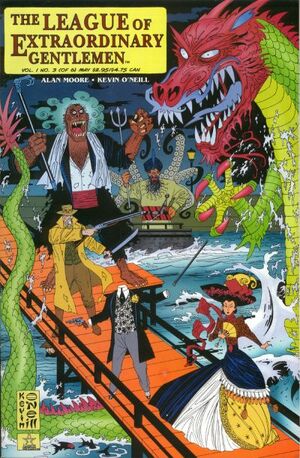 It's a funny thing, but I'd much rather face a horde of screaming bantus than receive another ticking off from our Miss Murray.

Appearing in "Mysteries of the East"Edit

Synopsis for "Mysteries of the East"Edit

The League of Extraordinary Gentlemen go to the Limehouse district of London in order to investigate a stolen supply of Cavorite. Mina Murray and Hawley Griffin go Quong Lee's tea shop. They ask Quong about a mysterious Chinese figure known as the "Doctor". Quong's response is told in the form of a riddle that leads them to the Rotherhithe Bridge.

Allan Quatermain and Henry Jekyll on the other hand go to Shanghai Charlie's in search of the same information. Inside, Allan even spies the notorious Fu Manchu as the latter is carving Chinese symbols into a man's flesh with acid. But he is not yet sure if this man is the "doctor" they are seeking.

They later regroup with Mina and Hawley. Mina tells them that she has learned about an unfinished project known as the Channel Tunnel that was designed to provide passage between England and France. She suspects that this is where the "doctor" may be designing a flying siege ship – powered by the stolen Cavorite.

Mina and Allan later return to the Limehouse district posing as beggars. They rent a room at a flophouse and from there, begin investigating activity around the abandoned channel tunnel. They discover that beneath the tunnel is a huge cavern where the Chinese crime lord is indeed building a gigantic lethal airship.

The Time Traveler beckons Allan Quatermain, Randolph Carter and John Carter to board his time machine. He tells them that he deliberately called their astrals selves to this plane to help him fight against hordes of intergalactic entities that threaten to pierce the barriers of the Earth dimension. They sail away into the time stream leaving the grotesque monster behind. The Time Traveler takes them several thousands of years into the future where he maintains a headquarters. His sanctum is a large Sphinx-shaped domicile. Almost as soon as they arrive however, ape-like Morlocks attack the time machine. The Traveler and the others are forced to jump onto the machine in order to escape. One of the Morlocks jumps on behind them and attacks Allan Quatermain.

Retrieved from "https://heykidscomics.fandom.com/wiki/League_of_Extraordinary_Gentlemen_Vol_1_3?oldid=1469545"
Community content is available under CC-BY-SA unless otherwise noted.