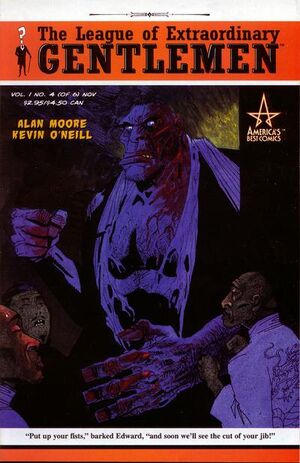 Put up your fists, and soon we'll see the cut of your jib!

Appearing in "Gods of Annihilation"Edit

Synopsis for "Gods of Annihilation"Edit

July, 1898
Allan Quartermain and Mina Murray scale down a dangerous ladder leading deep into the Rotherhithe Tunnel. Hawley Griffin makes his entrance through an easier egress. They witness Fu Manchu being carried about on a litter. One of Fu Manchu's men finds Quartermain and Mina, but Griffin comes up behind him and slices the thug's throat open. Griffin later meets up with Henry Jekyll outside and tells him to create a diversion so Allan and Mina can sneak past Fu Manchu's guards and steal the Cavorite. Jekyll transforms into Hyde and begins slaughtering the Chinese guards. For reasons unknown, Mister Hyde’s preternatural senses allows him to see Griffin's heat signature.

Quartermain and Mina succeed in finding the Cavorite engine and steal it. But Fu Manchu's men discovers them and begins attacking. They trap them inside of a sealed chamber which begins flooding with water. Mina is forced to activate the Cavorite device, launching them upwards out of the Rotherhithe Tunnel. Captain Nemo picks them up in the Nautilus.

They regroup and report back to Campion Bond's office at the British Museum. Strangely though, Hawley Griffin has disappeared. Moments later, Campion leaves the group and reports to his superior M. M is revealed to not be Mycroft Holmes, as Mina once suspected, but instead, he is actually Professor James Moriarty – arch nemesis of Sherlock Holmes.

The Time Traveller desperately tries to angle the time machine through the time stream. The Morlock still has a hold of Quatermain and slashes him across the shoulder. Allan beats him back with a monkey wrench until the creature finally falls away. The Traveller gets the time machine back on course until they settle through an environment of giant glass-like cube prisms. Staring into one, Allan sees visions of the future. He sees himself in an opium den with a woman standing over him.

Retrieved from "https://heykidscomics.fandom.com/wiki/League_of_Extraordinary_Gentlemen_Vol_1_4?oldid=1469530"
Community content is available under CC-BY-SA unless otherwise noted.