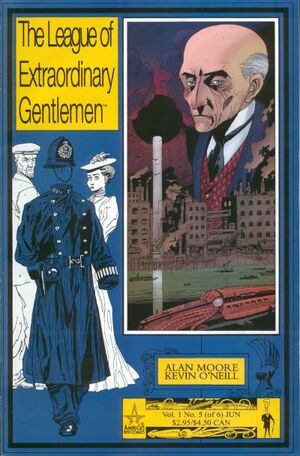 Strange. He thought me... an enemy... of the state... never reasoning... that it might suit the state... to create... its own enemy. Shadowboxing, Bond. We're all just... shadowboxing.

Appearing in "Some Deep, Organizing Power..."Edit

Synopsis for "Some Deep, Organizing Power..."Edit

May 4th, 1891
Eight years ago at Reichenbach falls in Switzerland, Sherlock Holmes and James Moriarty have their final confrontation. Holmes quickly jots down a message to John Watson before engaging Moriarty. The two fight and Moriarty falls down into the falls. He miraculously survives however and Holmes escapes by scaling the cliff side. It is believed by the world however, that Holmes dies at this time.

July, 1898
Hawley Griffin murders a constable and steals his clothes and nightstick. He spies on Campion Bond's office and overhears him speaking with Moriarty. They plan to use their own Cavorite powered airship to bomb East London.

Hawley races back and tells the others on board the Nautilus. They are currently docked in Wapping, very near to the airship’s target area.

Outside, Moriarty's own personal war craft hovers overhead. It begins unleashing ray beams of destruction down on London’s East End.

At Lady Ragnall's mansion, Marisa vainly tries to protect the body of Allan Quatermain who has fallen into a state of torpor. Allan's consciousness exists on an existential plane along with Randolph Carter, John Carter and the Time Traveller. They sit atop a gigantic gemstone the surface of which reveals images of the past, present and future. Allan sees the visage of his own comatose body back at the Ragnall estate, with Marisa looking on in horror. Slowly, Randolph, John and even Allan begin to disappear from this alternate plane of existence to return to their own time. When Allan's body awakens, he is possessed by an infectious, alien presence. Crawling like a crab and growling like a beast, he approaches Marisa in a threatening manner.

Retrieved from "https://heykidscomics.fandom.com/wiki/League_of_Extraordinary_Gentlemen_Vol_1_5?oldid=1469528"
Community content is available under CC-BY-SA unless otherwise noted.