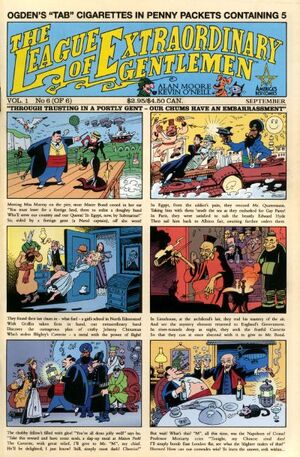 Appearing in "The Day of Be-With-Us"Edit

Synopsis for "The Day of Be-With-Us"Edit

Moriarty's airship begins raining balls of plasma down on London's East End. Allan Quatermain and Mina Murray look on in horror. Returning to Nemo's side, they board Nemo's own aircraft, a large hot air balloon named Victoria.

Nemo pilots his balloon alongside Moriarty's ship, and the League rappel themselves on board. Nemo opens fire on Moriarty's men while Henry Jekyll transforms into Mister Hyde and wades into them. Quatermain and Mina get to the main deck where Moriarty is situated. Moriarty shoots Allan in the shoulder and Mina uses a monkey wrench to smash the housing of the Cavorite engine. The device begins floating upwards into the air and the maddened Moriarty grabs onto it. They both float away high into the clouds.

Without the Cavorite, the airship begins to descend over London. The League races back to the Victoria, which has suffered some damage and is now deflating. It crashes into the Thames, but all aboard manages to survive.

As the League returns to British Intelligence headquarters, they learn that Mycroft Holmes is now taking over the leadership roll vacated by Moriarty. Holmes tells the League that he plans on leaving Campion Bond on board, despite the fact that he is aware of his complicity in recent events.

Outside, large flaming objects from the sky begin descending down on England.

Allan's spirit hovers over his body. He is horrified to discover that one of the alien entities the Time Traveller had warned him about, a creature known as a Lloigor, has taken possession of his body. Allan rejoins his body and wrestles to gain control of the form from that of the Lloigor. The Lloigor, crawling like a crab attacks Marisa. Lady Ragnall, passes away from fright. Marisa begins scrawling out a blood ward designed to repel the Lloigor from Allan’s body. As it writhes on the floor, it kicks at some embers in the fireplace setting the entire room ablaze. With the help of Marisa's spell, Allan reasserts dominance over his body and the two flee the burning building.

Retrieved from "https://heykidscomics.fandom.com/wiki/League_of_Extraordinary_Gentlemen_Vol_1_6?oldid=1469526"
Community content is available under CC-BY-SA unless otherwise noted.