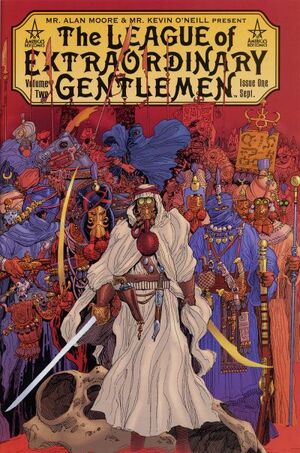 Oh God. Gullivar, it's an armada. Those photograph cubes. That egg. They know where we come from. Earth. They're heading for Earth.

Appearing in "Phases of Deimos"Edit

Synopsis for "Phases of Deimos"Edit

On the planet Mars, Gullivar Jones flies a magic carpet to an encampment where he meets with John Carter to coordinate a war against a non-Martian species called "Molluscs" (who are the aliens from H.G. Wells' The War of the Worlds), which have been bedeviling the native Martians. Gullivar and Jones had assembled an alliance between Mars's native inhabitants and ride into battle. After a great battle in which the tide turned favor for the Martian forces after the Sorns finally entered into the fray and crippled the invaders' tripods, the Molluscs take off from Mars in spaceships. John postulates that they have left for Earth, because they had determined that is where the humans on Mars came from.

On Earth, the members of the League of Extraordinary Gentlemen step out of a coach in Horsell Common, where an impact crater can now be seen where one of the ships landed.

Retrieved from "https://heykidscomics.fandom.com/wiki/League_of_Extraordinary_Gentlemen_Vol_2_1?oldid=1469524"
Community content is available under CC-BY-SA unless otherwise noted.