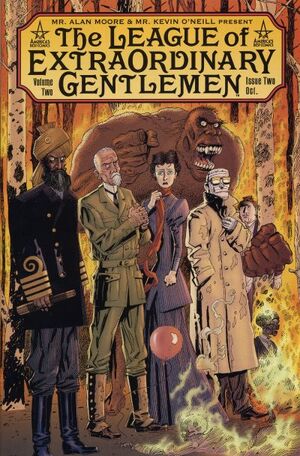 I know that I am hideous and hateful. I am not loved, nor ever hope to be. Nor am I fool enough to think that what I feel for you is love. But in this world alone, I do not hate you... and alone in this world, you do not hate me.

Appearing in "People of Other Lands"Edit

Synopsis for "People of Other Lands"Edit

The League meets with Campion Bond and are told of the airborne object that arrived in England this morning. Mina asks if it could be a Military Intelligence project and Bond assures her that it is nothing of the kind. Bond mentions that the astronomer royal Stent believes it is life from another planet, but rejects that notion. The capsule opens to reveal an alien with multiple tentacles. The League and the onlookers back away from the pit containing the capsule and alien, wary of any danger it may present. The Royal Astronomer and a party of four approach the alien waving a white flag. The alien disintegrates the five people and emits some sort of heat ray that fries the crowd assembled on the outside of the pit.

The League takes cover and the flames cause Mr. Jekyll to change to Mr. Hyde. Mina calms Hyde down and the group returns to their inn for the night. Mina and Quatermain talk out on the porch and see the arrival of British troops. They return inside and discuss the day with the other members of the League. Griffin, the invisible man, sees another alien cylinder streaking through the night sky and Quatermain remarks that it looks as though it is heading toward Woking. While the others sleep, Mina lets herself into Hyde's room, where the beast is sitting up on the bed, doing nothing in particular. He hears her and invites her into the room. They sit and talk about their friendly relationship, something Hyde lacks with the others.

Meanwhile, Griffin has stolen into the pit and begins communicating with the aliens by drawing pictures in the sand and telling them that he will help them because he wants to be on the winning side.

Retrieved from "https://heykidscomics.fandom.com/wiki/League_of_Extraordinary_Gentlemen_Vol_2_2?oldid=1469522"
Community content is available under CC-BY-SA unless otherwise noted.