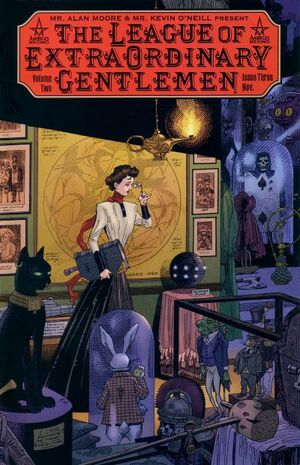 That's right. I'm telling you what to do. And I've killed Pathans and Kurds uglier than you in my time. Now get in the coach.

Appearing in "And the Dawn Comes Up Like Thunder"Edit

Synopsis for "And the Dawn Comes Up Like Thunder"Edit

The League is roused by the sound of cannons and go stand out front of their inn. It seems the second cylinder fell on a golf course in Surrey, and the troops at Horsell Common are shelling it. As the league watch, most of the troops are destroyed by the alien's heat ray, along with the cannons. The heat ray also destroys the inn that the League was staying in. If they had remained inside any longer, they too would be dead. A coach arrives, the driver telling the group he was tasked with bringing them back to London if the situation worsened. The League board the coach and begin the trip back to London. During the ride, Wilhelmina Murray gets the feeling that not everyone in the group will survive this mission.


Back in London, the League meet with Campion Bond and Mycroft Holmes and are asked not to mention alien invasion, so as not to cause a panic among the general public. For the moment, the League is tasked with returning to Horsell and observing the aliens as well as researching Mars. Bond gives Mina secret war plans and asks her to study them. Because they are returning to Horsell in the morning, Captain Nemo, Edward Hyde and Allan Quatermain decide to go out on the town. While out on a roadway, the three men and their driver discover an alien tripod outside the crater. They rush back to London to warn Military Intelligence.


Back at base in London, Mina is reading about Mars and gets up for a break. She discovers Hawley Griffin, fully invisible, reading the secret plans that were given to her by Bond. She confronts Griffin, who still invisible, beats her until she throws up. He then pushes her face in the sick, knocks hero out and leaves. The rest of the League return and Hyde discovers the unconscious Mina. Due to his sense of smell, Hyde immediately determines that Griffin is responsible for Mina's current condition. Bond discusses Griffin's betrayal and their plans with the other members of the League. Hyde and Nemo are to take refuge in Nemo's submarine, the Nautilus. Quatermain and Mina are put on a train, sent to South Downs to contact a scientist who may be able to help. While on the train, Mina sees a third cylinder streaking through the sky.

Retrieved from "https://heykidscomics.fandom.com/wiki/League_of_Extraordinary_Gentlemen_Vol_2_3?oldid=1581294"
Community content is available under CC-BY-SA unless otherwise noted.