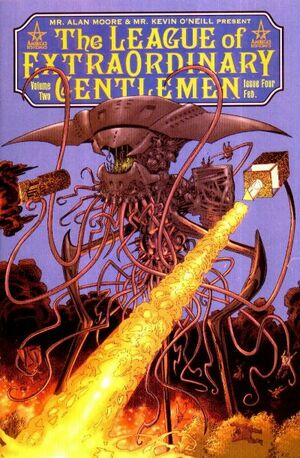 I know what children look like, Nemo. I've often scraped them off my boots.

Appearing in "All Creatures Great and Small"Edit

Synopsis for "All Creatures Great and Small"Edit

A family traveling by train is all killed by a Martian tripod except for the son, who is rescued by Captain Nemo and the crew of his submarine. A gun aboard the Nautilus takes down the tripod. Through conversation between Nemo and Edward Hyde we learn that one of the aliens was defeated by artillery in Shepperton. Nemo tasks his crew with bringing the wreckage of the tripod aboard, so that he can study the alien technology.

In the meantime, Allan Quatermain and Wilhelmina Murray are walking in tall grass toward a forest, in search of a scientist who may be able to help against the alien invasion.

Back in England, Nemo puts the Nautilus to port and leaves the rescued boy, Jimmy Grey, in the hands of the local constabulary.

Mina and Quatermain meet a man named Teddy Prendrick who begins talking to them about a devil doctor and his island. After conversing, the man becomes nervous, warns the two not to follow him and takes off in the opposite direction. Mina and Quatermain determing that the doctor Prendrick mentioned is the very same scientist that they are seeking and that he must be nearby. They begin searching the woods for him as an unknown creature is secretly stalking them.

Back in England, the city is under attack by the tripods. Nemo is coordinating the counterattack.

Now night, Quatermain and Mina have retired to a room in their inn where they make love for the first time.

At the same time, aboard the Nautilus, Hyde is repeatedly punching the wreckage of the tripod they destroyed earlier in the day and miles away, Griffin is showing the aliens that what is stopping them is a submarine and that they must do something to the river to overcome this obstacle. After Mina and Quatermain have made love, Quatermain sees bite marks on Mina's necks. She remarks that they are not the discreet two puncture marks of legend. In fact, they are much more gruesome.

Retrieved from "https://heykidscomics.fandom.com/wiki/League_of_Extraordinary_Gentlemen_Vol_2_4?oldid=1469518"
Community content is available under CC-BY-SA unless otherwise noted.