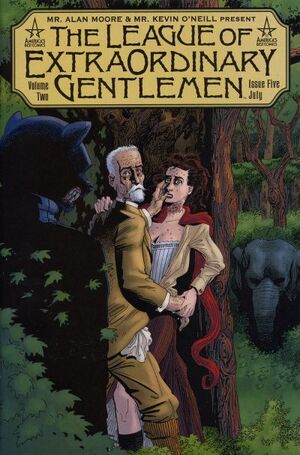 You're wrong. Why, I'm obsessed with the past. I simply can't let things go. Do you know what I mean. I'll see you later, I expect.

Appearing in "Red in Tooth and Claw"Edit

Synopsis for "Red in Tooth and Claw"Edit

In England, the Martians have stopped up the river with an overgrowth of red vegetation, effectively rendering the Nautilus useless until the vegetation can be cleared. Edward Hyde tells Captain Nemo that he is not waiting around all day and is going to the museum. He invites Nemo to join him there this evening for dinner.

Meanwhile, Wilhelmina Murray and Alan Quatermain are searching the woods for their scientist. Mina is giving Quatermain the silent treatment because he reacted badly to her neck scars last night when they were making love. Quatermain explains that he was not repulsed by the scars, they just brought back memories of his second wife, who was similarly scarred in a fire. The two begin to make love against a tree, when two legged animals powered with the gift of speech, detain them.

Back in England, the coachman William Samson drops Hyde off at the museum. Inside the museum, Hyde sits down and waits for Hawley Griffin to show. When he does, Hyde reveals that he can see Griffin with heat-sensing infrared vision. He then breaks one of Griffin's legs and begins torturing him.

Back in the forest, the animal-men have led Mina and Quatermain to the sanctuary of Dr. Alphonse Moreau. Dr. Moreau shows the two some of his experiments and Mina and Quatermain tell the doctor of the alien invasion and about MI5 look for H-142, as Moreau reacted with some concern on the latter. The doctor suggests they discuss things over dinner.

At the museum, Hyde leaves his torturing of Griffin, to join Nemo and the coach driver for dinner. In the midst of dinner conversation, blood appears on Hyde's shirt. When Nemo calls it to the beast's attention, Hyde tells his dinner companions the blood is from Griffin and if it is appearing now, it must mean that Griffin has expired. Nemo rushes to the next room to find Griffin's body. Horrified and disgusted, Nemo attempts to kill Hyde, but is held back by the coachman Samson, who urges him not to, as Hyde's incredible strength may be useful against the Martians. At this same time, the Martian tripods are beginning another attack on England.

Retrieved from "https://heykidscomics.fandom.com/wiki/League_of_Extraordinary_Gentlemen_Vol_2_5?oldid=1469516"
Community content is available under CC-BY-SA unless otherwise noted.