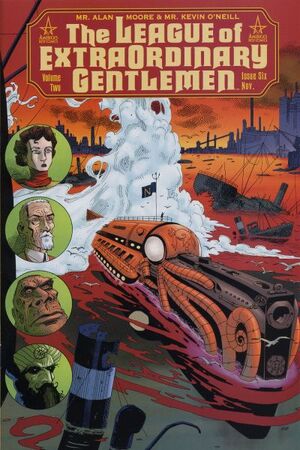 We... We cannot know what feelings our enemies have... But we may be certain at least, that Hyde taught them terror.

Appearing in "You Should See Me Dance the Polka.."Edit

Synopsis for "You Should See Me Dance the Polka.."Edit

Allan Quatermain, Wilhelmina Murray and Dr. Alphonse Moreau are waiting at a train station. When the train arrives it will carry Mina, Quatermain and a hybrid experiment of Dr. Moreau's, H-142, that is expected to defeat the Martians. Allan and Mina return to London and the experiment is removed from the train by gas-masked intelligence agents. The two are awaited by Campion Bond who tells them that all bridges apart from London Bridge have been made impassable in a bid to impede the invaders, and that H-142 must be delivered. They arrive to London Bridge, reuniting with the League, where they see that the Martians have managed to destroy the last of the city's defences and have gathered all their forces on the other side for their final push into the capital.

It is learned that they need to distract the attacking Martians until Military Intelligence can arrange to deliver the H-142. Hyde tells Minda that he killed Griffin and tells her that it was quick, to spare her feelings. He then agrees to supply the distraction needed against the Martians. Before he does so, he asks Mina for a kiss, which she graciously supplies. Hyde dances out onto the frontline, singing a polka and is hit with the heat ray from one of the Martians. Miraculously, he survives the blast. Hyde attacks the legs of the tripod, staying beneath it, where the heat ray cannot reach him. He destroys the legs, toppling the tripod, tears it open and begins to eat the alien inside. The aliens compatriots all fire heat rays at Hyde, incinerating him.

Military Intelligence fires a cannon, delivering H-142 to the Martians. It is then that Campion Bond tells the remaining members of the League that the hybrid is in fact a combination of anthrax and streptoccus, a biological weapon. Nemo is outraged and resigns from the League. The aliens all die of disease and Quatermain mentions that England is considering changing the name of Serpentine Park to honor the fallen Hyde. Mina tells Quatermain that recent events have left her unsettled and that she must go on a sabbatical to leave for Coradine, a ladies' commune in Scotland, until she is certain of her feelings. Quatermain finds himself seated on a park bench, alone.

Retrieved from "https://heykidscomics.fandom.com/wiki/League_of_Extraordinary_Gentlemen_Vol_2_6?oldid=1469514"
Community content is available under CC-BY-SA unless otherwise noted.