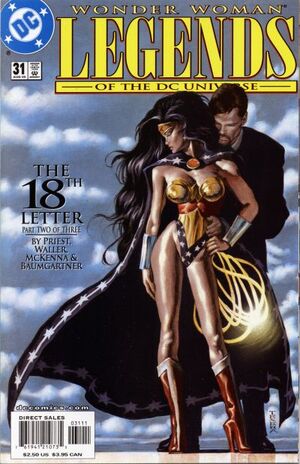 Appearing in "The 18th Letter: A Love Story - Act Two"Edit

Synopsis for "The 18th Letter: A Love Story - Act Two"Edit

We learn a little of Fury's past, how her powers were granted to her by the Furies (Erinyes) of myth, the same creatures who pursue Alcmaeon to the present day. It also learn that Hippolyta saved her life when Fury was a hero during World War Two, and how Fury immediately identified herself with the Amazon.

Wonder Woman is stalling for time by seeking advice from those closest to her: her mother, Batman, Julia Kapatelis and finally Superman, but in the end she knows she has to agree with Alcmaeon's demands - she is an ambassador of peace after all. He takes her around the world, making the "one night" last as long as he possibly can, both partying and (at Diana's insistence) doing a little good. Almost to his horror, he begins to feel himself genuinely fall for her, partly due to the beauty of her voice. He then foolishly gets into a fight with the embittered Fury, forcing Wonder Woman to intervene, attracting Fury's attention herself. Despite the violence, however, Alcmaeon and Diana's 'night' ends with a kiss.

Retrieved from "https://heykidscomics.fandom.com/wiki/Legends_of_the_DC_Universe_Vol_1_31?oldid=1439594"
Community content is available under CC-BY-SA unless otherwise noted.