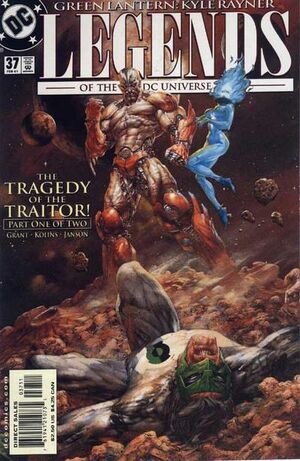 Kyle Rayner, the Green Lantern, returns to his apartment to discover Jade frozen in mid-step by a strange alien visitor, Stellara of Ramnos, who tells him the history of Devlos Ungol the Traitor. She explains that when the sun recently went out briefly, Ungol was able to escape and has been recharging his batteries in readiness for revenge on the Green Lantern. He has begun his re-ascendance to power by attacking Stellara's world. She tried to battle him, but failed, an unknown event for a Stellaran. Kyle makes up his mind to go with her and help her, but doesn't actually have a choice. When he recharges his ring, he finds that Stellara has tampered with his power battery, so that he is instantly transported to her world, closely followed by Stellara.

They arrive at a world that has been blasted into many small parts by the Traitor, who confronts them and laughs at the pale imitation of Green Lantern who faces him. Kyle is then attacked on two fronts, as Stellara fires on him from behind. It seems that the DNA of the inhabitants of Ramnos contains a sequence which obliges the loser of any combat to become the bond-slave of the winner - she has no choice but to do what Ungol tells her. Somehow, Ungol is able to take Kyle's ring from him, and crushes it. Killing the ring, he says, is equal to killing the Green Lantern. He and Stellara then move off, first to Ungara, then Earth, on a trail of destruction.

Retrieved from "https://heykidscomics.fandom.com/wiki/Legends_of_the_DC_Universe_Vol_1_37?oldid=1439606"
Community content is available under CC-BY-SA unless otherwise noted.