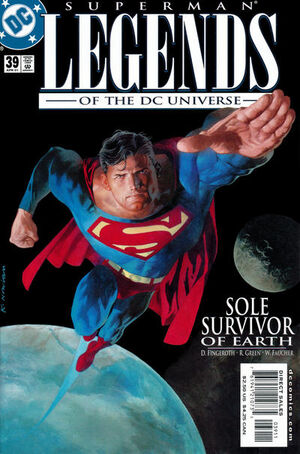 Appearing in "Sole Survivor of Earth"Edit

Synopsis for "Sole Survivor of Earth"Edit

Scientist Anton Balboa has been studying seismic activity on Earth and his calculations have led him to believe that the planet is doomed unless immediate action is taken. When the wider scientific community ignores his warnings, he takes matters into his own hands, sending his creations, the multibots, deep inside the Earth to correct seismic instabilities. However, the robots instead cause further, catastrophic instabilities, which Superman detects and tries to halt, tackling the robots inside the Earth. Here, cut off from the sun and in extreme conditions, Superman begins to weaken, and has to escape from the Earth's core using one of the robots as a survival suit. While he is doing this, Balboa overreacts to the seismic upheaval and uses the multibot prototype to send his son into space on a journey to a planet millions of miles away where Malachi should stand a chance of survival.

Superman uses the multibot to track down Balboa, and is astonished first by the revelation that the scientist had good intentions and then by the fact that the child has been blasted off into space. Superman takes the multibot and pursues the child, narrowly succeeding in bringing him back to Earth safely. Here, he meets Agent Geller of the FBI Anomolous services, whom he instructs to make sure that the baby is cared for even if Balboa must be taken into custody.

Retrieved from "https://heykidscomics.fandom.com/wiki/Legends_of_the_DC_Universe_Vol_1_39?oldid=1439609"
Community content is available under CC-BY-SA unless otherwise noted.