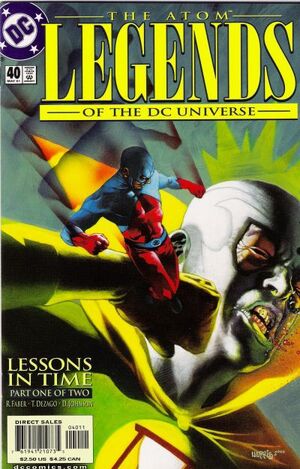 On a jaunt into the past courtesy of Professor Hyatt's wonderful invention the Time Pool, the Atom is surprised by a dog, then himself surprises the dog's owner, English writer Jonathan Swift, who sees the tiny blue-clad man disappear into a pool of light. As he emerges in the present day he is nearly seen by the Professor, and reminds himself to be more vigilant. Later that night, the villain Chronos sneaks into the lab to begin his plan to enlarge the time pool and reap a great harvest of treasures from many times.

The next day, while having lunch (in his alter ego of college tutor Ray Palmer) with his fiancée Jean Loring, the Atom tries to explain his worries over one of his students who is likely to lose his scholarship in the near future. He even spots the student, J.D. Holden, and tries to talk to him, but doesn't get through at all. That night, Chronos begins the process which will lead to the widening of the Time Pool.

The next day, one of Ray's students points out that time seems to be misbehaving, and Ray decides to investigate as the Atom. He makes his way to the Justice League headquarters, where Snapper Carr is fretting over his strategy and crisis simulations exam. The Atom discovers that something is indeed terribly wrong at Ivy University and, with Snapper's help, patches together some equipment to help him track the problem. When he locates it, he comes across first J.D. breaking into his office, and then an aggressive Chronos. After a skirmish he is able to get Chronos to knock himself out. When the villain comes to, he has some bad new for the Atom - left unchecked, the device he has rigged up to the Time Pool is bound to overload, dooming everyone.

Retrieved from "https://heykidscomics.fandom.com/wiki/Legends_of_the_DC_Universe_Vol_1_40?oldid=1496264"
Community content is available under CC-BY-SA unless otherwise noted.