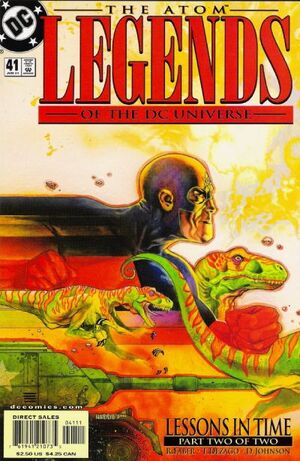 Chronos rants and raves to the people guarding his cell - as he cannot attend to his 'temporal battery' it is likely to go into overdrive, causing all time to exist at once and dooming everyone in Ivy Town...and beyond. And he's right - dinosaurs, space craft and World War II tanks suddenly fill the campus of Ivy University, sending students and faculty into a panic-driven exodus. The Atom calls on Snapper Carr's assistance - he needs him to run a crisis simulation program to see what can be done. Snapper, however, does not think he is up to it: he has been having particular trouble with the application the Atom wants him to use: the entropy program.

The Atom then begins concentrating on saving people from the disastrous effects of the temporal explosion - including J.D., whom he reaches as Doc Palmer; in so doing he forces his student to recognize that he sometimes has to rely on others. After this, he suggests to Snapper that he think of time as the 'timestream', which leads the young man to the realization that the Atom needs to create an explosion at the very source of the problem. Atom improvises a bomb from the substances in the university's chemistry labs and takes it to the Time Pool. Here he is confronted by a future version of Chronos, who claims to have supplied this era's villain with the technology to create the temporal battery. During the course of their battle, the villain is able to destroy the Atom's bomb, but the hero realizes that the cellular phone he reduced to tiny size has been in that state for almost an hour, and is therefore due to explode - he hurls this into the time pool and the future Chronos disappears, along with the dinosaurs, Romans, spacemen and the rest.

Later, at the JLA headquarters, the Atom is somewhat morose, because he feels that he could not reach his student J.D. in a professional capacity, but Snapper, unaware of the hero's other life, tells him that he's the best teacher he's ever had.

Retrieved from "https://heykidscomics.fandom.com/wiki/Legends_of_the_DC_Universe_Vol_1_41?oldid=1496265"
Community content is available under CC-BY-SA unless otherwise noted.