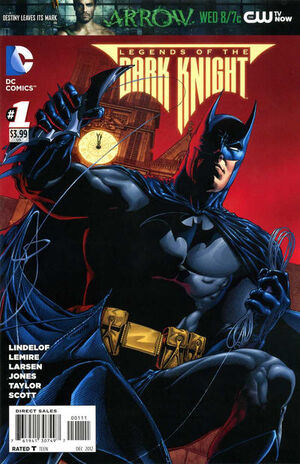 Everyone has a vulnerability.

Appearing in "The Butler Did It"Edit

Synopsis for "The Butler Did It"Edit

It is six months into Batman's career, and while he is learning the ropes, Gotham City's criminals are beginning to learn that he is not to be trifle with. He remains able to outsmart them by his superior intellect; by unpredictability.

One night, he spots a man holding a family at gunpoint in an alley, and leaps down onto the gunman. Pressing the man against a wall, he warns him "No families. No kids." The thug grins, revealing that the one he thought was a child is merely a small man, who produces a bat, and bludgeons Batman into unconsciousness. It had been a trap; tailored specially for him. He wonders which psychopath must have arranged it, knowing his vulnerability; the truth about his parents.

He remembers how earlier, he had been drunkenly boasting to Alfred Pennyworth about how his lack of powers made him less vulnerable than heroes like Superman or Green Lantern, because they had weaknesses like Kryptonite, or the colour yellow. He believed he was invulnerable. Alfred suggested that every man has a vulnerability. Bruce stubbornly refused to believe this, and bet his butler one dollar that he was invulnerable. Disgustedly, Alfred left him to his drink.

Now, beaten and broken, Batman pries open his eyes to see the men who had beat him walking away while Alfred approaches. His friend and Butler greets him gravely, reaches into his utility belt, and removes a one dollar bill from it. Everyone has a vulnerability, after all.

Appearing in "All of the Above"Edit

Synopsis for "All of the Above"Edit

While Batman stands alone at monitor duty on the Justice League Satellite, he is suddenly alerted to an unsanctioned teleporter use, but accompanied by a seemingly empty teleporter bay. Someone has got onto the satellite unseen. This would require one of many abilities: invisibility, metamorphosis, magic, mind control, super-speed - or all of the above. Casually, he traces letters onto the glass windows of the satellite, waiting for the arrival of Amazo - an android designed to have the powers of the entire Justice League.

Batman tries to initiate the protective protocols against attacks by Amazo, but he is knocked back. The android then disables the alarm, forcing Batman to resort to Plan C, by locking himself within the airlock chamber. If the airlock is breached, the rest of the League will be summoned. The android explains that he is planning to take out the league one by one - the first of which will be the one without powers. As Amazon activates the external airlock door, Batman shouts that if Amazo thinks him powerless, the android should think again.

Batman is shot out into space, while Amazo tries to access the computer files. Suddenly, the android is distracted by an arrow flying at him. When he looks, though, the Green Arrow is nowhere to be seen - just his bow and quiver. Then, the thermostat begins to rise and Amazo begins to suspect that this is merely some program left behind by the Batman to make him think he is still alive. Turning around, the resultant condensation on the windows reveals the words "THINK AGAIN."

Amazo's hearing is so acute that his cpu filters out background noise, like the sound of Batman's arterial flow. The ventilation fans are synched to Batman's heart rate. The lights cover his bioelectric frequency, making Amazo stay focused on the visible spectrum. While the heat reveals Batman's message, it also raises the temperature to mask Batman's heat signature.

Knowing that Amazo can hear his neurons firing, Batman thinks hard, drawing the android to him. Then, to distract him, he explains how he got back onto the satellite from outer space. Though his rebreather was short on air, he had a teleporter controller with him - and dropped it. So, he used bat-shark repellent to propel himself toward it. In the meantime, though, Batman has reprogrammed the teleporter controller, and activates it just as Amazo leaps at him. Instantly, Amazo is teleported - in pieces - to different parts of the world.

Afterwards, Batman wonders if he didn't contact the rest of the league because part of him wanted to prove that just one man could take down the entire league, without powers.

Appearing in "The Crime Never Committed"Edit

Synopsis for "The Crime Never Committed"Edit

Batman follows a paper-trail that he is sure will lead to a crime. A rifle, gloves, crowbar, balaclava, and van rental - all purchased with the same credit account. The holder of that account is one Mike Carey, and Batman decides to pay him a visit.

While Mike sleeps next to his wife, Batman puts a hand over his mouth, and drags him up onto the roof of his apartment building. He is further startled by the appearance of Robin, who has retrieved the gun from its hiding place above the kitchen shelves, where Mike's daughter would not find it. He found no bullets in the gun, or anywhere in the apartment. Robin explains that they know his daughter is sick, and that he was recently fired from the Gotham Aquarium. Tomorrow night, he plans to go back there and steal a tank full of very rare, very expensive fish. He will get access to the building using his old ID card - thereby alerting police to his guilt, and from there, one of two things could happen.

In the first scenario, Batman and Robin are there to stop Mike, and they will put beat him down, hand him over to the police, and his daughter will spend 5 years without her father. In the worst case scenario, Batman and Robin are not there to stop him, and then the empty shotgun will be of no use against Jack Conte - the dangerously unstable security guard, who was terminated from the Gotham City Police Department for his excessive force and illegal firearm discharges. As soon as Conte sees the gun, he will shoot Mike dead.

Batman explains that the city has enough criminals, and that they can prevent him from becoming one if he listens now. He urges Mike to work out how to deal with his daughter's illness - without resorting to crime. Likewise, he will have to figure out how to get off the roof by himself.

Retrieved from "https://heykidscomics.fandom.com/wiki/Legends_of_the_Dark_Knight_Vol_1_1?oldid=1439515"
Community content is available under CC-BY-SA unless otherwise noted.