Legion: Foundations was a six-issue story arc pitting the Legion of Super-Heroes against Darkseid. 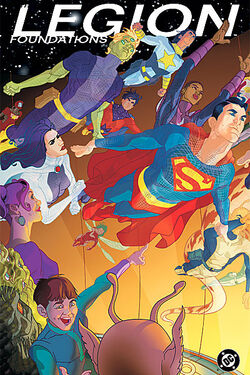 Legion: Foundations was a six-issue story arc pitting the Legion of Super-Heroes against Darkseid.

The entire universe, along with all galactic history was nearly destroyed when a gigantic plot by Darkseid threatened to give him control of the universe. In a miscalculation, attempting to retrieve a young Clark Kent to brainwash as one of his servants, Darkseid's agents brought Superboy into the 31st Century via Boom tube, where the Science Police found him floating through space. When Spark planted crystals she had found at the site of the former rift in the Second Galaxy on Trom, Live Wire reappeared, back from the dead, albeit in the Progenitor's body.[1] They came into conflict with a group of terrifying dark super-beings in space who were tampering with the Stargate systems. Dreamer suddenly lost her ability to perceive the future, leading her to determine that somehow, there was no longer a future left.[2] Further investigation would yield that Stargate and Boom Tube technology were being combined towards much more sinister purposes. The size of the Universe itself was somehow being rapidly diminished.[3] Clark Kent was able to resist Darkseid's brainwashing, remembering his previous identity after seeing Superboy's emblem. He defected and joined the Legionnaires to help combat Darkseid's growing forces. Brainiac 5 determined that Darkseid had actually been siphoning dark matter and energy from our galaxy into a period about ten years in the past. When the Legionnaires launched their attack on Apokolips to stop him, they were just in time for the final phase of his plan: Darkseid was actually bringing his own past self into the present, and teaming up with him.[4] The older Darkseid, fearing that his body was succumbing to thousands of years of decay, brought his younger self back as a fresher body with which he could use to conquer the universe. Although the removal of a God from his own time period would cause the destabilizing and rupturing of the entire timestream in that era, Darkseid's plan had been to create a dark matter buffer ten years in his own past... so that although the entire history of creation would be obliterated, he would be able to rule the future. What he didn't count on was, the young Darkseid having no problem with brutally murdering his older self.[5] Unfortunately, the Darkseid of the 31st Century had not yet completed his machinations. Their time period was still vulnerable, and began to collapse around them, along with everything else. Although the past had been erased, Kid Quantum figured out that there was still about half an hour left of structured time behind them... enough to go back, and prevent Darkseid from being killed, or being displaced in time. Kid Quantum, Superboy, Live Wire and Violet traveled backwards, and while the primary Legion subdued the older Darkseid, the Legionnaires from the future pushed the younger one back into the portal from whence he had came, stopping the temporal destruction before it could begin. Young Clark Kent himself delivered the final blows to Darkseid, subduing him and completely draining him of any remaining power in the fight. Clark Kent was returned to his own time with his memory erased by Saturn Girl, and existence was saved.[6]

Retrieved from "https://heykidscomics.fandom.com/wiki/Legion:_Foundations?oldid=1516582"
Community content is available under CC-BY-SA unless otherwise noted.