Run From Tomorrow is a Legion of Super-Heroes storyline written by Fabian Nicieza and Tom DeFalco with illustrations by Pete Woods and Matt Camp. It is published as part of the New 52 reboot following continuity changes during Flashpoint. T 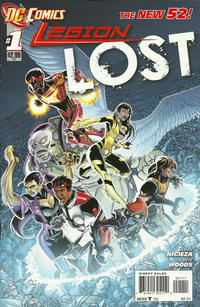 Run From Tomorrow is a Legion of Super-Heroes storyline written by Fabian Nicieza and Tom DeFalco with illustrations by Pete Woods and Matt Camp. It is published as part of the New 52 reboot following continuity changes during Flashpoint. This is the debut arc on the second volume of Legion Lost, published alongside Hostile World in Legion of Super-Heroes. The story is followed by The Culling, which concludes the series.

There is a terrible tragedy in the 31st Century and seven Legionnaires are believed to have died. The Legion is unable to travel through time due to the "Flashpoint effect."[1] Chameleon Girl, Dawnstar, Gates, Tellus, Timber Wolf, Tyroc and Wildfire are actually stranded when their Time Bubble crashes in the 21st Century. Their Flight Rings and Transuits malfunction, forcing them to rely on their powers alone. They capture their target Alastor, who has released the Hypertaxis pathogen into the past as his revenge on humanity. While they try to return to the future, Alastor destroys their Time Bubble to escape. Chameleon Girl and Gates are seemingly obliterated in the explosion, and the Legionnaires are trapped in the past.[2] It's explained that Hypertaxis morphs humans into random alien hybrids called Hypersapiens, as an ironic punishment for xenophobia. Jeffrey Scanlon becomes the first Hypersapien, and fights the Legion then escapes when they try to cure him.[3] Dawnstar and Tellus are unable to track Alastor and Scanlon. The Legionnaires try to contain the Hypertaxis outbreak, with Hypersapiens appearing across the state of Minnesota. Timber Wolf takes down a Rdrayyj hybrid that they believe to be Chameleon Girl, still alive.[4] Chameleon Girl is shown to have survived, but she is trapped in a body that she cannot control. The Legion resists law enforcement while subduing her, and Major Nicholson of A.R.G.U.S. sends the Black Razors to take them down. Dawnstar and Tellus locate Alastor, but they are unable to reason with him and he tries to destroy them.[5] Alastor shrugs off all of the Legion's attacks, having learned to perfectly control his Hypersapien powers. Tyroc takes down the Black Razors with hypersonics and escapes with Wildfire. Timber Wolf attempts to escape with Chameleon Girl, but the government captures him and he's approached by Martian Manhunter. Tellus knocks out Alastor with his telepathic powers, and explains that the Hypertaxis evolutions will become a great advantage to humanity. Gates returns through a portal alive, although he is now horribly deformed.[6] Tyroc leads a strike on the government facility where Timber Wolf and Chameleon Girl are being held. Martian Manhunter interrogates Timber Wolf on secret orders of Stormwatch, to discern his origins. Timber Wolf reveals that he allowed himself to be captured, and easily breaks free of his guards. Martian Manhunter battles Tyroc and Wildfire, but they realize they're on the same side and he helps restore Chameleon Girl to normal. Before leaving, Martian Manhunter informs them that their trip to the past was one-way and they will die in the 21st Century. Alastor escapes when Tellus lets his guard down.[7] The Legionnaires track Alastor to New York City, and set themselves up in a hotel. Timber Wolf meets a petty thief named Oz and they rob a gang of drug dealers. Tellus tries to comfort a comatose girl named Katia, who dies due to a texting while driving accident. Before dying, Katia reveals that she can sense Tellus has a secret he is keeping from his friends.[8]

Retrieved from "https://heykidscomics.fandom.com/wiki/Legion_Lost:_Run_From_Tomorrow?oldid=1497779"
Community content is available under CC-BY-SA unless otherwise noted.