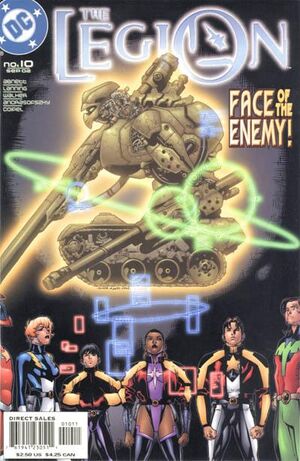 My mother-in-law, who hates the Legion, and me especially, just got made president of the galaxy.

At a Legion of Super-Heroes meeting, Cosmic Boy announces that the Legion's new leader is Kid Quantum.

Spark (First appearance as Live Wire) goes home to visit family after announcing she would now like to be called Live Wire to honor her fallen brother.

Retrieved from "https://heykidscomics.fandom.com/wiki/Legion_Vol_1_10?oldid=1440461"
Community content is available under CC-BY-SA unless otherwise noted.