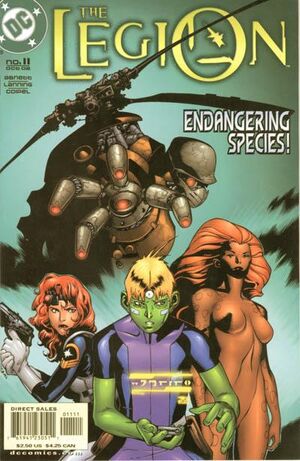 Since I took charge, Earth's been fundamentally overrun by the Robotican species. And I've just authorized a full-scale invasion. That's right. Backed by the fleet, the Legion is invading the Earth.

The Legion of Super-Heroes invade Earth, which has been turned into a huge machine by the Robotica.

They encounter a shield surrounding the Earth and withdraw until they can figure out a way through it. Legionnaires fly to Warworld and activate the technology. They find themselves face to face with the JLA.

Retrieved from "https://heykidscomics.fandom.com/wiki/Legion_Vol_1_11?oldid=1440462"
Community content is available under CC-BY-SA unless otherwise noted.