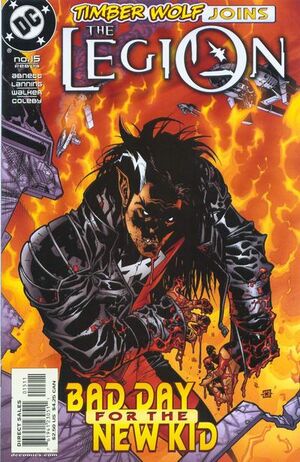 Join the Legion, see the galaxy, get your sprocking brains beat out...

On his first day with the Legion of Super-Heroes, Timber Wolf attends a United Planets meeting, a memorial service for Monstress. Then he goes to the world Trom to say good-bye to Element Lad at his grave.

On day two, Timber Wolf escorts the prisoner Tharok to Takron-Galtos. The transport is attacked by the Fatal Five and the other Legionnaires are all taken out. Timber Wolf must face them alone.

Retrieved from "https://heykidscomics.fandom.com/wiki/Legion_Vol_1_15?oldid=1440466"
Community content is available under CC-BY-SA unless otherwise noted.