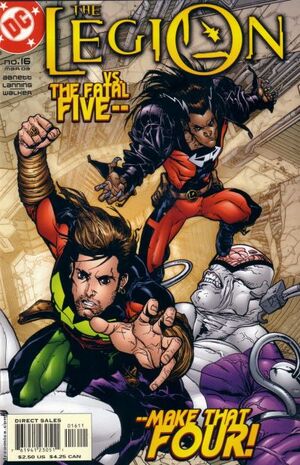 That's right, Tharok. He's with us.

Appearing in "Five Reasons to Call in Sick"Edit

Synopsis for "Five Reasons to Call in Sick"Edit

Timber Wolf is the last Legionnaire left standing to fight the Fatal Five. Validus knocks him through a wall and then boards their ship and prepares to leave. The Fatal Five discovers that they cannot leave because someone has removed a vital part of the ship.

Mano, Empress and Persuader go in search of Timber Wolf. Timber Wolf takes them out one by one. Timber Wolf takes the fight to Validus, Emerald Eye of Ekron and Tharok and keeps them at a stand-still until the Legion of Super-Heroes can respond to the distress call that went out automatically when the transport was attacked.

The Legion then makes short work of the remaining Fatal Five.

Retrieved from "https://heykidscomics.fandom.com/wiki/Legion_Vol_1_16?oldid=1440467"
Community content is available under CC-BY-SA unless otherwise noted.