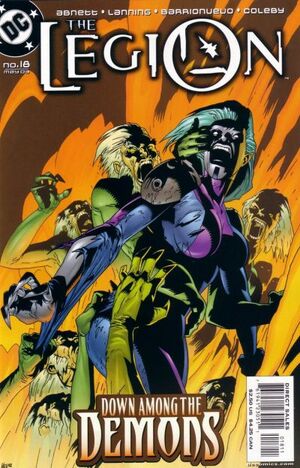 Next time you decide to bring the most dangerous criminal in known space aboard, M'Onel, maybe you could check with me first?

Appearing in "Revival of the Fittest: Part Two"Edit

Synopsis for "Revival of the Fittest: Part Two"Edit

Brainiac 5, Star Boy and Invisible Kid run some tests to try and determine why Ra's al Ghul killed himself trying to escape Legion custody. They discover that Ra's al Ghul is still alive, minus a body.

Star Boy and M'Onel rush to the storage area where the Legion of Super-Heroes has been holding Ra's al Ghul's cloned bodies. All of the stasis tubes open, freeing all the clone bodies. Ra's al Ghul quickly occupies one of them. He surprises Star Boy, steals his flight ring and flies away. Ra's al Ghul lands and ditches the ring to avoid being tracked by the Legion. Gates, Sensor and Shikari go to the ring's location and Ra's ambushes them.

M'onel arrives and begins fighting Ra's. Ra's goes toe to toe with M'onel, knocking him for a loop. Ra's grabs Shikari and forces her to open a Threshold teleportational gate. And then he stops and tells M'onel that he can escape any time he wants.

He returns with M'onel to the lab to help Sensor with her evolutionary change. In return he is detained on Legion World.

Retrieved from "https://heykidscomics.fandom.com/wiki/Legion_Vol_1_18?oldid=1440469"
Community content is available under CC-BY-SA unless otherwise noted.