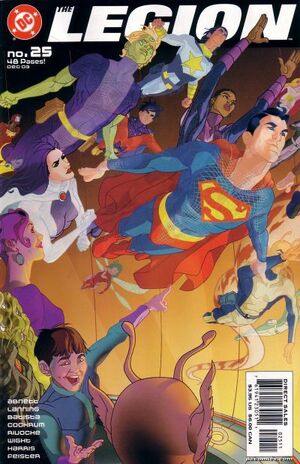 I don't do magic.

On Legion World, Kid Quantum introduces herself and the rest of the Legionnaires to the all-new Cadets of the Legion Academy.

The Legion receives a top-priority alpha-level secrecy distress code from around Braal, where a dangerous Dimensional Storm threatens the surrounding lifeforms, including the President's spacecraft. During the mission, Cosmic Boy asks Kid Quantum out on a date. After containing the threat, the Legionnaires learn what the real reason for the secrecy surrounding the mission was: Superboy had just been found drifting through space.

Spark attempts to make peace with Element Lad at his gravesite on Trom, despite believing him responsible for the death of her brother. In memorial, she plants several of the crystals she found at the site of their mutual destruction in the base of the grave. She also tours her brother Mekt, reformed since his career as Lightning Lord, around Legion World.

When Cosmic Boy and Saturn Girl journey to Trom to discuss how to deal with the memory of Element Lad towards the new recruits, they are surprised when what appears to be Element Lad rises up from the crystals. He is equally as confused though, and explains himself to not be Element Lad, but Live Wire.

In Smallville, a group of people claiming to be the Legion of Super-Heroes interact with a young Clark Kent and request that he urgently follow them to the 31st Century. He obliges, and soon finds himself on... Apokolips.

Retrieved from "https://heykidscomics.fandom.com/wiki/Legion_Vol_1_25?oldid=1503802"
Community content is available under CC-BY-SA unless otherwise noted.