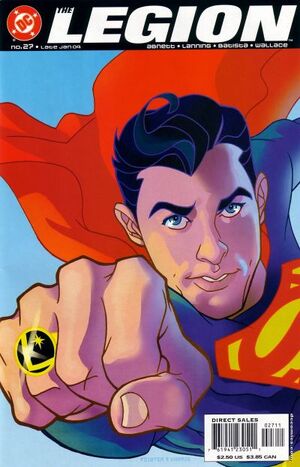 Define "super-massive" in this context.

Invisible Kid and Brainiac 5 fight the two invaders and the invaders escape via Boom Tube. Invisible Kid chases them through the tube before it can close.

Brainiac tries to track Invisible Kid's location. He manages to get a signal, but it is weak.

Invisible Kid sends a message to the Legion that the beings they were fighting have reactivated a stargate and are draining dark matter out of the Legion's universe. The Legion arrives and begins fighting the beings. The beings escape via Boom Tube. They discover that the drained dark matter is being used to create a huge Boom Tube.

This issue contains a sneak peek at Gotham Knights #50.

Retrieved from "https://heykidscomics.fandom.com/wiki/Legion_Vol_1_27?oldid=1501936"
Community content is available under CC-BY-SA unless otherwise noted.