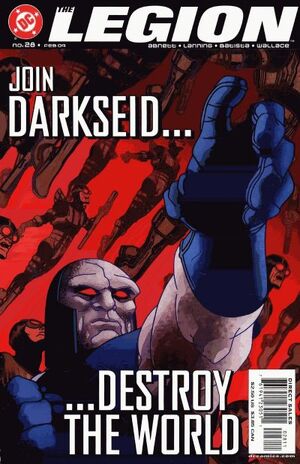 Darkseid Was. And so -- Darkseid Is.

Clark explains to the Legion that he was kidnapped by three time travelers who took him to a dark planet, brainwashed him to become a servant of darkness and then he regained his senses and escaped to Kansas via Boom Tube.

Clark leads a group of Legionnaires to Apokolips and they begin fighting para demons. Darkseid arrives.

This issue contains a sneak peek of Fraction.

Retrieved from "https://heykidscomics.fandom.com/wiki/Legion_Vol_1_28?oldid=1503808"
Community content is available under CC-BY-SA unless otherwise noted.