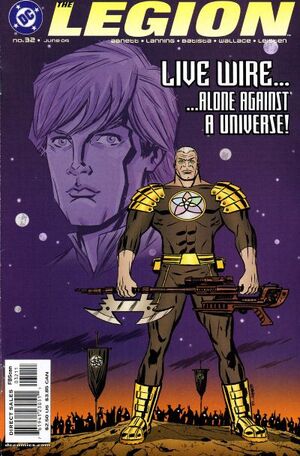 Understand this... between them, the beings you've just target-locked can sunder gravity, reverse time, split planets, freeze your minds and unleash power you've never dreamed of faster and more devastatingly than you could possibly imagine. You do not want to pick a fight with us.

Live Wire, now in the body of Element Lad, turns himself in to Singularity who reneges on the deal and throws him in a cell with the rest of the Legion captives.

Retrieved from "https://heykidscomics.fandom.com/wiki/Legion_Vol_1_32?oldid=1440483"
Community content is available under CC-BY-SA unless otherwise noted.