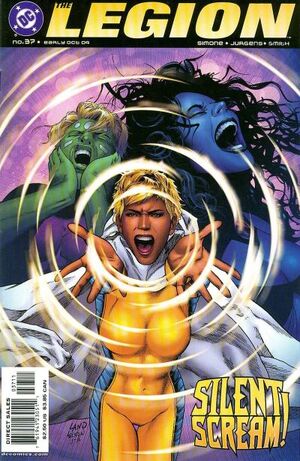 If there's no more old business, everyone here gets a task, starting with a search and rescue of this entire facility. If anyone blows their assignment, there will be demerits.

Appearing in "For No Better Reason: Part Three - A Sense of Confinement"Edit

Synopsis for "For No Better Reason: Part Three - A Sense of Confinement"Edit

Now that the floating prison has made landfall, the prisoners are trying to escape. Karate Kid is all that stands in their way. He begins fighting them all.

The Legion of Super-Heroes cadets capture two the the would-be assassins who have been targeting Legionnaires.

Retrieved from "https://heykidscomics.fandom.com/wiki/Legion_Vol_1_37?oldid=1440488"
Community content is available under CC-BY-SA unless otherwise noted.