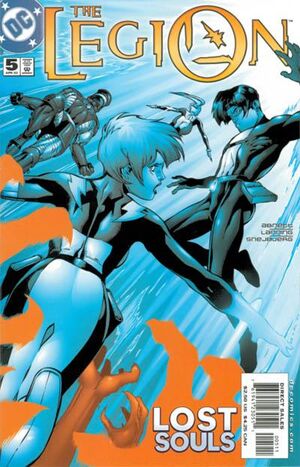 No charter changes the fact that the Progeny are murderers!

Wildfire, Saturn Girl, Spark and Invisible Kid fight some Kwai. They tell the Kwai they are friends and stop fighting. The Kwai take them home to meet their leader. The Legion of Super-Heroes ask for help from the Kwai and the leader of the Kwai tells them to wait while it considers. A group called the Credo arrives and tries to recruit people into their group. They are dedicated to eliminating the Progeny.

The Credo find a group of Progeny on the planet that the Legion are warning about the Credo. The Credo start killing Progeny and the Legion fight to preserve life. Enraged, Saturn Girl takes control of the Credo's minds. She tells them to leave now and to tell the rest of the Credo that the Progeny are under the protection of the Legion.

On a planet on which the Credo have committed genocide of the Progeny, the Credo reports to its leader, Singularity their defeat at the hands of the Legion.

Retrieved from "https://heykidscomics.fandom.com/wiki/Legion_Vol_1_5?oldid=1440456"
Community content is available under CC-BY-SA unless otherwise noted.