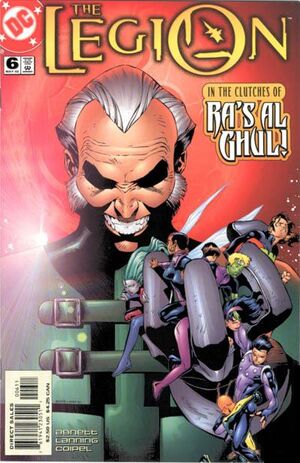 Shut Up! I'm saving your lives!

A flare disrupts a demonstration and Zoe Saugin saves some civilians.

Elsewhere, Cosmic Boy tells reporters the Legion of Super-Heroes is active once more. He and other Legionnaires go to see the President and tell him personally.

Once there, they find M'Onel, strength sapped by red solar lamps. They destroy the lamps and M'onel tells them that the President is an imposter, Ra's al Ghul.

The President is on a dock, preparing to leave, when the Legion burst through the concrete to stop him. He sends his Oversight Watch group to do battle with them. The Legion defeats the group and the President reveals himself to be Ra's al Ghul.

Ra's tells the Legion about the flare and they leave him in order to save lives instead.

Retrieved from "https://heykidscomics.fandom.com/wiki/Legion_Vol_1_6?oldid=1440457"
Community content is available under CC-BY-SA unless otherwise noted.