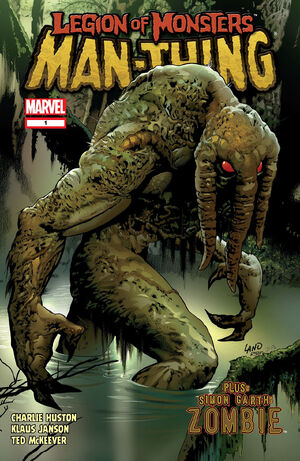 Her touch is without solace. Her voice, without music. Only noise. Her noise is deafening.

Appearing in "A Flower in Alien Soil"Edit

Synopsis for "A Flower in Alien Soil"Edit

In Citrusville, Florida, a millionaire known as Mister Deflyte harasses his gardener, Wilmes, over the state of his garden. After accusing Wilmes of deviating from a rigidly prescribed feeding regiment, he violently kicks him off of the property.

Standing outside of the mansion's gates is a woman named Esperanza. Ignoring the exchange between the two men, she instead stands and admires Deflyte's rose bushes. Deflyte learns that Esperanza knows a great deal about horticulture and hires her to replace the elderly Wilmes.

One evening, Esperanza grows curious about some of Mister Deflyte's party guests, and sneaks a peak into the dining hall. Deflyte has the head and upper body of the Man-Thing resting upon a serving platter. He begins slicing pieces off of him and serving them to his guests as food. As the evening wears on, the guests fall asleep at their plates.

Esperanza (possessing little knowledge of what the Man-Thing truly is), creeps into the room and places a carnation before him on the platter. The presence of the flower nurtures the Man-Thing, enabling him to slowly reconstitute his full body. The party guests awaken as a fully formed Man-Thing rises from the table. Naturally, they all grow intensely frightened by his presence. Their fear prompts the Man-Thing's acidic touch, but in a wholly new dynamic. True to the adage, "Whatever knows fear burns at the touch of the Man-Thing", the party guests begin to blister and burn, as the consumed portions of the Man-Thing within their stomachs begin to burn their way out.

A crew of firefighters and medics sift through the wreckage of several destroyed buildings. One of the medics, Marvin, finds the desiccated remains of Simon Garth – the Zombie. He brings the corpse to Gerber hospital where it is placed inside the morgue.

Later that evening, the Zombie rises from the metal table and examines the body of a nearby cadaver. Sensing no life at all whatsoever, he turns around and climbs out the window.

The zombie shuffles down the street whereupon he finds a lowlife attacking a defenseless woman. The Zombie breaks the assailant's neck, then stares down at the horrified would-be victim. He wipes a tear away from the woman's face and tastes it.

Later, the Zombie comes upon three inebriated partiers hanging out front of a night club called The Rabbit's Hole. The female partier, Kissy, is sexually attracted to the zombie and even begins feeling him up. She wants the Zombie to strangle her, but grows angry when the creature refuses to end her life. Calling him a "corpse tease", Kissy and her friends attack the Zombie and nearly destroy him. A police officer arrives and scares the thugs away. He then radios for an ambulance to take care of the Zombie.

The Zombie is taken back to Gerber hospital and placed in the morgue again. He gets up from the table and approaches the female cadaver that he examined earlier. Her body twitches slightly, and it becomes clear that she too is now a zombie. Lonely, he scoops the body up, and sneaks back out through the window. He brings his new "corpse bride" to a shallow grave, and the two lay down together.

Retrieved from "https://heykidscomics.fandom.com/wiki/Legion_of_Monsters:_Man-Thing_Vol_1_1?oldid=1515698"
Community content is available under CC-BY-SA unless otherwise noted.