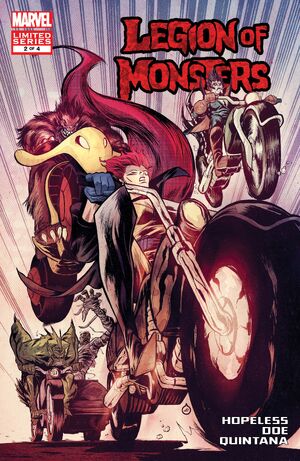 Humans are being killed in a wave of monster attacks…but the monsters are innocent! With a mystery murderer on the loose, and the survival of humanity at stake, Elsa Bloodstone and her sworn enemies the Legion of Monsters team up and hit the road!

Satannish states the Angel Grove massacre took place in 1973, but this is technically impossible: it removes Morbius from Marvel Time and fixes his history in a solid point in time. If Morbius had become a living vampire prior to 1973 in-universe, it means the various people he met up until that point, including Spider-Man, Curt Connors, and various X-Men, should have aged 40 years as well, which they haven't.

Retrieved from "https://heykidscomics.fandom.com/wiki/Legion_of_Monsters_Vol_2_2?oldid=1440360"
Community content is available under CC-BY-SA unless otherwise noted.