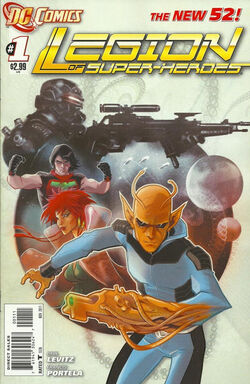 Hostile World is a Legion of Super-Heroes storyline written by Paul Levitz with illustrations by Francis Portela. It is the first arc of the seventh volume of Legion of Super-Heroes, following the conclusion to volume 6 in When Evil Calls. This is published as part of The New 52, a company-wide continuity reboot following the events of Flashpoint. The story is published alongside Run From Tomorrow in Legion Lost, and is followed by The Dominators.

The Legion of Super-Heroes struggles, believing that Chameleon Girl, Dawnstar, Gates, Tellus, Timber Wolf, Tyroc and Wildfire are dead.[1] They enlist Chemical Kid, Comet Queen, Dragonwing, Glorith, and Harmonia to deal with the loss of personnel. They are unable to travel to the past because of a barrier created by the "Flashpoint effect." Colossal Boy has retired to the Science Police with his wife dead. Mon-El continues to act as leader with Brainiac 5 as deputy leader. Chameleon Boy leads an Espionage Squad including Chemical Kid, Dragonwing, Phantom Girl and Ultra Boy to investigate Dominator surveillance on the United Planets watchworld Panoptes. Their suspicions are confirmed, and they're attacked by a Daxamite enforcer named Renegade.[2] Brainiac 5 unsuccessfully tries to find a way around the Flashpoint effect. Renegade believes that the United Planets has turned Daxam into a prison by putting them in quarantine due to their fatal weakness to lead. He defeats the Espionage Squad, but they're rescued by Mon-El. Mon-El and Ultra Boy subdue Renegade just as the Dominators ships arrive at Panoptes.[3] The Espionage Squad battles the Dominator fleet while reinforcements arrive. They destroy ships until the Dominators are forced to flee, and Mon-El takes down Renegade.[4] Renegade breaks free of his Inertron bonds, but Chemical Kid stops him by altering his bio-chemistry. Chameleon Boy stows away on a Dominator ship to learn about their plans. Brainiac 5 struggles to figure out how Glorith's force field could be so powerful, and realizes she must be displacing energy through time. Mon-El bursts into the lead Dominator ship and gives them a final warning, revealing that the Anti-Lead Serum they gave to Renegade was poisonous. Chameleon boy returns with Mon-El. Mon-El's ex-girlfriend Shadow Lass remarks that he is becoming himself again.[5]