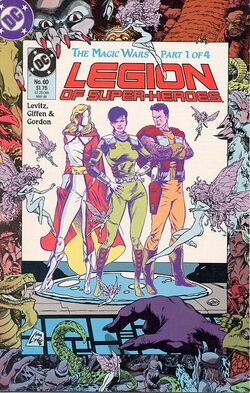 If we fail here, my friends, they surely will, for magic will rule and science vanish. So gather the Legion... and let us stand here against chaos... as if it were our final battle.

Sensor Girl is elected Legion leader with Timber Wolf as her deputy, although she does not want the job. The Legion of Super-Heroes is called in to deal with a mythological Hydra attacking Greece. They are flooded with reports of technology failing, natural disasters, and seemingly magical attacks on society. Antonio Stefanacci at the Museum of Mystic Arts is surprised to find that his exhibits have come alive. Sensor Girl receives a warning from ancient mystics that magic has returned, and the laws of science are doomed to fail.[1] Earth descends into chaos when all of its technology stops working. Rioters attack Stefanacci's museum, and the Legion drives them off. Sensor Girl meets with Stefanacci, and they're approached by an emissary of Sorcerers' World. Using their powers together with Sun Boy's knowledge, they restore the laws of science to Earth. This fixes the problem on Earth, but science is still broken across the universe. Sensor Girl uses her birthright to confer with deceased Legionnaires and ask for advice, but the Emerald Eye cuts off her contact to the afterlife. These events release an ancient evil known as the Archmage, who is angry at Earth for defying him.[2] Weber's World is evacuated, as it depends entirely on technology. The Legionnaires deal with supernatural monsters while traveling to Sorcerers' World. Brainiac 5 tries to help out on Colu, and decides to return to the Legion. Sorcerers' World is protected by a magical barrier, which requires a human sacrifice to open. Magnetic Kid flies into the mechanism and commits suicide to save the universe. This opens the gates, releasing the Archmage.[3] The Legionnaires all attack the Archmage, but their powers are useless against its magical nature. They need magic to fight magic, and they summon the other Legionnaires. Dream Girl leaves Atmos on Xanthu to rejoin the Legion and get back with Star Boy. Cosmic Boy is devastated to learn that his brother is dead. Brainiac 5 returns and suggests that they descend to Sorcerers' World, as the Archmage has been trying to keep them away. They meet White Witch on the surface, where she is helping the other mages evacuate. White Witch and her student Harlack stay behind to fight, knowing that the Archmage will kill them both. The spirit of Zerox the Gemworld talks to them, and asks them to let the planet die. The Legionnaires allow Archmage to destroy the planet, and this eliminates all magic in the universe, killing him as well. In the aftermath, the Legionnaires discuss rebuilding. The United Planets are in shambles due to the loss of their technology, but Sensor Girl swears that as long as there is a Legion things will be okay.[4]

Retrieved from "https://heykidscomics.fandom.com/wiki/Legion_of_Super-Heroes:_The_Magic_Wars?oldid=1582140"
Community content is available under CC-BY-SA unless otherwise noted.