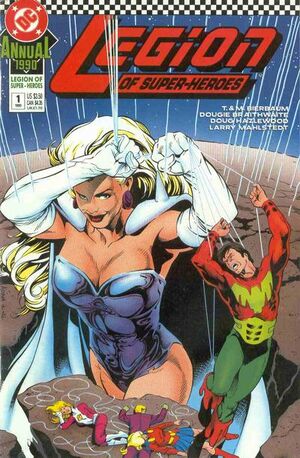 Glorith murders everyone on Daxam in a massive holocaust to prevent the power of the Daxamites getting into the wrong hands. The Legion of Super-Heroes has to fight her, but she is too powerful to risk everyone. Before they leave, Ultra Boy asks Saturn Girl not to take Lar and reveals a terrible secret to her that she cannot share with anyone. There is a squad sent led by Brainiac 5 including Duo Damsel, Lar Gand, Laurel Gand, Rond Vidar and Saturn Girl. The sorceress defeats all of them in turn easily. Saturn Girl lies wounded and Glorith picks up on her thoughts, learning the life story of Ultra Boy.

Ultra Boy was born on the planet Rimbor. His parents Crav and Mytra Nah, two independent farmers, taught him the value of his freedom from an early age, and he grew up with a tendency to avoid authority figures. On the streets, as a member of a gang, he learned several more lessons. Never let them know what you know. Don't ever fight a battle unless it's on your terms. Never let your guard down, they can get you at any time. These are the rules he lives his life by.

Retrieved from "https://heykidscomics.fandom.com/wiki/Legion_of_Super-Heroes_Annual_Vol_4_1?oldid=1505322"
Community content is available under CC-BY-SA unless otherwise noted.