Start a Wiki
Part of the 'Bloodlines' event 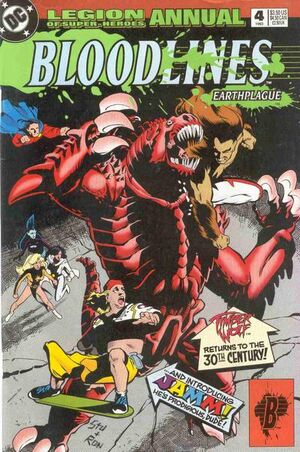 Prodigious surfer-dude "Jamm" is teleported into the 31st century shortly after being attacked by an alien parasite "Angon" along with Timber Wolf. The Legion of Super-Heroes fights Angon and sends her, confused and defeated, back to the 21st Century. They decide to keep Jamm, still recovering from the bite on his neck, for observation in the medical wing of Legionnaire Headquarters. Jamm finds himself with the ability to force others to do what he says with simple verbal commands. He has several members of the Legion take him around on a tour of the future, visiting the hottest spots for music and 'babes'. Lar Gand repeatedly tries to get him to see the immorality in his actions, but Jamm continues to miss the point and believes him to be boring. Finally, as his actions accidentally lead them plummeting into the Sun of Daxam while under attack by hordes of flying Daxamite Zombies, Jamm is forced to relinquish his control of the Heroes. After the danger is averted, they call a meeting to decide his punishment. Although initially they plan to leave him on a completely uninhabited planet so that he cannot pose a threat to anybody else, they eventually decide to just warp him back to the 21st Century. But he is warned beforehand, that if he ever tries to cause trouble again, Shadow Lass, whom he is deathly afraid of, will come back after him.

Retrieved from "https://heykidscomics.fandom.com/wiki/Legion_of_Super-Heroes_Annual_Vol_4_4?oldid=1439713"
Community content is available under CC-BY-SA unless otherwise noted.