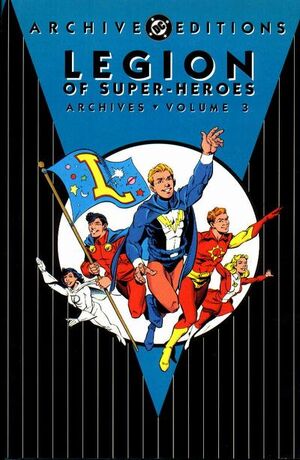 Appearing in "The Legion of Super-Heroes"Edit

Synopsis for "The Legion of Super-Heroes"Edit

Taken from inside flap:

Thirty-five years ago, a Superboy story in the pages of Adventure Comics #247 introduced a trio of teenaged super-heroes who were destined to become the first cult hit of the Silver Age of Comics. They were Cosmic Boy, Saturn Girl, and Lightning Lad, three of the 30th Century's greatest heroes who had travelled back to the past to pay homage to the ten hero who had inspired their own heroic careers... Superboy.

They were the Legion of Super-Heroes!

Over the years, the Legion's membership has multiplied, as have the fans of these amazing youths. They rose from occasional guest stars in Superboy stories to lead feature status in Adventure Comics and, eventually, into their own book. Today, the Legion inhabits not only their own title, but a variety of spin-off titles as well.

In the first two volumes of The Legion of Super-Heroes Archives, DC re-presented the formative years of the Legion. In this volume, we bring you the next thirteen installments in the Legion saga from the pages of Adventure Comics, Superboy, and Jimmy Olsen, stories that include such important events as the first appearance of the villainus Time Trapper and the introduction of Legionnaire Lone Wolf.

Along with the Superman Archives, Batman Archives, Dark Knight Archives, All Star Archives, Justice League of America Archives, Green Lantern Archives, and Shazam Archives, The Legion of Super-Heroes Archives provides the definitive collection of some of the most improtant ongoing series in America comic-book history.

This book reprints select stories relating to the Legion of Super-Heroes. Included are:

Retrieved from "https://heykidscomics.fandom.com/wiki/Legion_of_Super-Heroes_Archives_Vol_1_3?oldid=1439725"
Community content is available under CC-BY-SA unless otherwise noted.