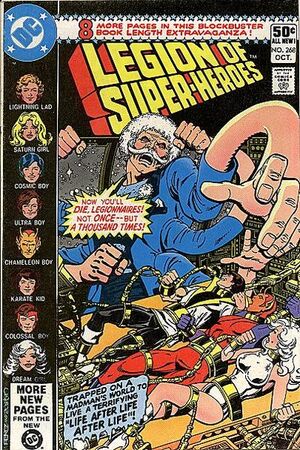 I just had one of my dreams. It was so horrible. It was the most powerful dream I've ever had. It was so real... First, I was tumbling, tumbling through a dark corridor and then I saw myself strapped down to some alter at the mercy of a great, multi-armed thing... a thing that was about to kill me!

Three members of the Legion board a subway car in space, which takes them to a strange planet. They encounter a multi-armed man who forces them to relive, and perhaps die from, their past lives.

Retrieved from "https://heykidscomics.fandom.com/wiki/Legion_of_Super-Heroes_Vol_2_268?oldid=1439778"
Community content is available under CC-BY-SA unless otherwise noted.