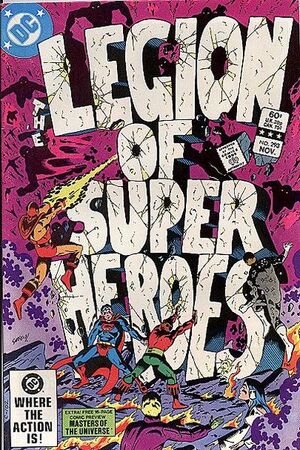 Most excellent, mindless ones. You have reshaped this world on which I stand perfectly as I bid. ... Go and conquer the universe for me...for the GOD in whose image you have carved your own world as a monument. Go... for your master... for DARKSEID!

Appearing in "Great Darkness Saga, Chapter Four: Within the Darkness..."Edit

Synopsis for "Great Darkness Saga, Chapter Four: Within the Darkness..."Edit

While the Legion fights his clone-minions, Darkseid takes mental control of the populace of Daxam and unleashes them on the universe as his warriors.

Appearing in "Fate is the Killer"Edit

Synopsis for "Fate is the Killer"Edit

Everyone arrives in front of Castle Grayskull. Superman assists in retrieving one of the other missing swords and gives it to He-Man. He-Man and Skeletor fight one another and impale each other upon their respective swords. Skeletor teleports back to his lair to nurse his wounds, leaving He-Man on the ground bleeding. Zadoc arrives and uses his power to heal He-Man. He then creates another dimensional tunnel and returns Superman back to Earth.

Retrieved from "https://heykidscomics.fandom.com/wiki/Legion_of_Super-Heroes_Vol_2_293?oldid=1503786"
Community content is available under CC-BY-SA unless otherwise noted.