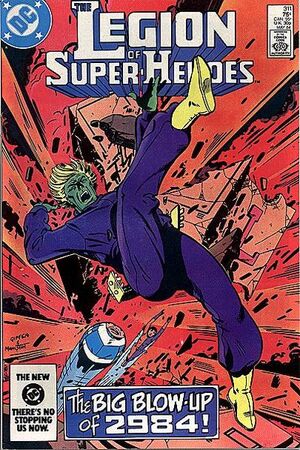 I traveled in search of my soul mate and found him... where I began. Wildfire and I share a destiny few can dream of... the life of Legionnaires. What we dare, how we survive our hopes, fears... they are much the same. I will be satisfied with his companionship.

Appearing in "Destruction by Design"Edit

Synopsis for "Destruction by Design"Edit

Brainiac 5 has a showdown encounter with Computo, whose mind he's trying to separate from Danielle Foccart's body.

Appearing in "A Shared Destiny"Edit

Synopsis for "A Shared Destiny"Edit

Wildfire goes in search of Dawnstar, who is still on her quest for a soul mate.

Retrieved from "https://heykidscomics.fandom.com/wiki/Legion_of_Super-Heroes_Vol_2_311?oldid=1439862"
Community content is available under CC-BY-SA unless otherwise noted.