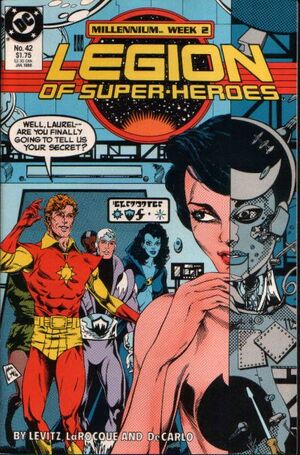 Appearing in "To Sleep a Thousand Years..."Edit

Synopsis for "To Sleep a Thousand Years..."Edit

As Tellus makes his way through Legion Headquarters, he encounters Polar Boy, who is extremely pleased with his recent accomplishments as Legion leader, Sun Boy and Laurel Kent, who are returning from a late date, Shadow Lass, Shrinking Violet, and Invisible Kid, who are using the gym facilities, and Chameleon Boy, who is leaving to visit the hospitalized Colossal Boy. All remain unaware that Laurel does not leave the building after parting company with Sun Boy, but instead steals into the Multi-Lab, and begins accessing computer data. When Brainiac 5 accosts her, she attacks him with unsuspected super-strength. No sooner does she defeat him, however, than Tellus, Violet, and Shadow Lass appear and continue the battle. Unable to steal any more data, Laurel smashes through the inertron ceiling and flies away. After Brainiac 5 determines the nature of the stolen information, he and the other three Legionnaires, as well as Sun Boy and Element Lad, journey to a remote Buddhist temple in the Himalayas, where another computer designed for genealogical research, the type of data accessed by Laurel, is known to exist. The resident monks welcome the heroes, but Tellus warns them that the monks are actually inhuman androids, a fact borne out when the monks attack them. The androids defeated, the Legionnaires enter the temple to discover Laurel Kent, who reveals herself as a Manhunter who has remained hidden on Earth for a thousand years, even as she battles the teammates to a standstill. Then, as the Legionnaires look on, Laurel causes the entire temple to explode.

Retrieved from "https://heykidscomics.fandom.com/wiki/Legion_of_Super-Heroes_Vol_3_42?oldid=1510071"
Community content is available under CC-BY-SA unless otherwise noted.