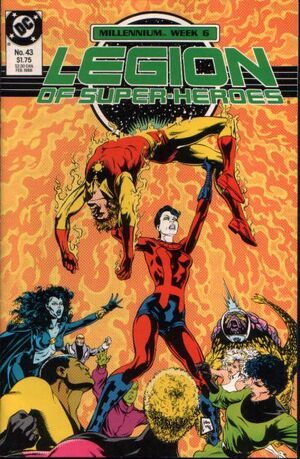 Appearing in "...And Wake to Find a Dream"Edit

Synopsis for "...And Wake to Find a Dream"Edit

Legionnaires Brainiac 5, Shadow Lass, Sun Boy, Element Lad, Shrinking Violet, and Tellus escape being buried alive beneath the ruins of the Manhunter temple brought down around them by Laurel Kent, but find no trace of Laurel or her android allies. When the team returns to headquarters, Polar Boy calls a meeting to discuss the situation. He finds the group unexpectedly shorthanded, however, as Quislet and Wild- fire are closeted in the former's quarters, and Chameleon Boy, as leader of the Espionage Squad, has departed on a personal mission. Polar Boy therefore assigns the sextet, augmented by Invisible Kid and Dream Girl, to investigate a rumored immortality cult in the Greater Amazon Region. Fending off an attack due to mistaken identity by the cultists, the Legionnaires are disappointed to find no trace of either Laurel Kent or the supposed immortals for whom she had been searching. When Laurel does appear and attacks a site in the Grand Canyon, the Legion is ready. Using the improved powers she has gained during her centuries in hiding, Laurel holds off the eight Legionnaires, and absconds with the detection device which Brainiac 5 had been using to seek traces of the special energies used by the Guardians of the Universe and their Green Lantern Corps. Using the detector, she locates a hidden city in the Himalayas, suffused with Oan energies. The Legionnaires are awaiting her arrival there, however, and a fierce battle follows, until Laurel suddenly realizes that the city is long abandoned and decaying. Believing that the Chosen, elevated to immortality by the Oans in the 20th century, have long since vanished from the Earth, the Laurel Manhunter comes to the conclusion that she had unfortunately been programmed to emerge from hiding too late to intercept them. Since her mission now has no possible chance of success, she explosively self- destructs, and the Legionnaires are protected from the resulting blast only by Brainiac 5's force shield. Sometime later, the Legionnaires bury the android's remains in a grave in the hidden city which they had constructed and irradiated to deceive her, and mourn the passing of the woman they had known as a Legion trainee. Unknown to them, back at Legion HQ, Polar Boy and Timber Wolf face two unexpected complications: Wildfire and Quislet have disappeared through a dimensional aper- ture, and Atmos of Xanthu has arrived with the intention of joining their ranks.

Retrieved from "https://heykidscomics.fandom.com/wiki/Legion_of_Super-Heroes_Vol_3_43?oldid=1510070"
Community content is available under CC-BY-SA unless otherwise noted.