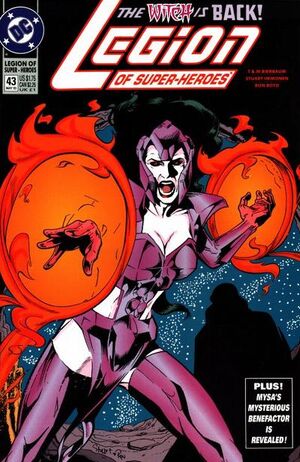 Now we'll have this out, "Lord Emperor"! And by the Spirits I Swear -- This time I will make you pay for your sins in full! Or Die in the Effort!

Mysa meets J'onn J'onzz, and is possessed by a strange force that causes her to go after Mordru. Her attack on Mordru fails, and she is absorbed by him, allowing him to revive the 30th century's dead.

Retrieved from "https://heykidscomics.fandom.com/wiki/Legion_of_Super-Heroes_Vol_4_43?oldid=1440154"
Community content is available under CC-BY-SA unless otherwise noted.