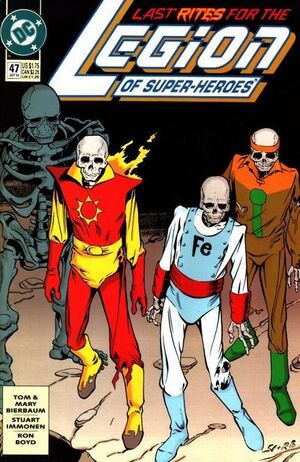 The Legion invades Mordru's planet. After defeating Mordru's resurrected villains, the Legion removes Mysa from Mordru's body. Mysa gives in to hate and is re-absorbed by Mordru, who then buries the Legion in rock. Meanwhile, Firefist and Devlin are knocked into Mordru's harem, where Firefist loses his temper and attacks Devlin, unaware that Devlin's reflective power would result in his death.

Retrieved from "https://heykidscomics.fandom.com/wiki/Legion_of_Super-Heroes_Vol_4_47?oldid=1440164"
Community content is available under CC-BY-SA unless otherwise noted.