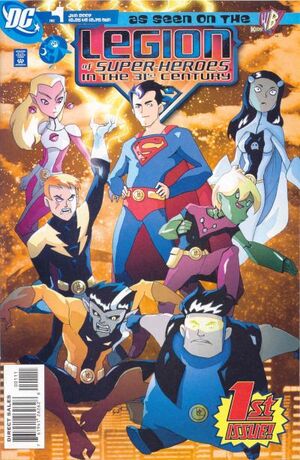 Download an Old English dictionary, look up the word "nerd", and you'll find a hologram of Clark Kent next to it!

The Legion of Super-Heroes gather together to discuss their first impressions of Clark Kent. Saturn Girl feels that he is lost. Bouncing Boy thinks he's a nice guy, but Lightning Lad thinks that he's a nerd. They test Clark's strength level by having him lift a huge compressor, but the weight proves too much for even the Man of Steel, and he is forced to drop it.

Brainiac-5 muses over the fact that Clark is largely unaware of his future career as Superman, and reflects upon the moment when the Legion first traveled backwards in time to the 21st century to find him. Clark was using his super-strength to repair a broken Ferris wheel. After introducing themselves, they told him that they were from the future, and that Clark was destined to use his powers to become the most famous super-hero of all time.

After assuming the identity of Superman, Clark used his powers to help the Legion defeat their greatest foes – the Fatal Five.

After reflecting upon Clark's brief tenure on the team, Brainiac-5 concludes that the Legion is meant to help him become the hero he is destined to be.

Retrieved from "https://heykidscomics.fandom.com/wiki/Legion_of_Super-Heroes_in_the_31st_Century_Vol_1_1?oldid=1439730"
Community content is available under CC-BY-SA unless otherwise noted.