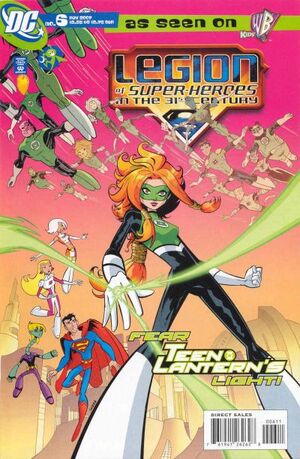 Heroes aren't supposed to attack other heroes... but today I guess I'll make an exception!

Appearing in "Attack of the Green Lantern Corps"Edit

Synopsis for "Attack of the Green Lantern Corps"Edit

Bouncing Boy and Lightning Lad are returning home from a mission when something suddenly slams into the side of their ship. Lightning Lad goes to investigate and discovers that the hull of their cruiser has been breached by Jordana Gardner of the Green Lantern Corps. Jordana has no real interest in the Legion cruiser and blasted through it for no other reason than it was in her way. Lightning Lad radios back to HQ and tells the Legionnaires that they have just been attacked by the Green Lantern Corps. Brainiac 5 gives the other a crash course in the Corps' history, but cannot understand why a police force known for doing so much good would act so aggressively. Triplicate Girl works with Computo and extrapolates the Corps' present trajectory. They are on a direct path towards Earth – specifically, New Metropolis. Before the Legionnaires have time to react, the Green Lantern Corps raids their headquarters. The Corps members greatly outnumber the present Legionnaires and Superman instructs Brainiac 5 to call for backup. Whenever anyone tries to question the Corps' actions, they merely respond with, "You are in the way" and continue attacking. Brainiac 5 converts into attack mode and flies into the sky. He recognizes Jordana Gardner and tries to reason with her, but she rebuffs him with a ring-generated construct.

Fortunately, the other members of the Legion arrive to lend a hand. Sun Boy keeps several Green Lanterns at bay with his flame bursts while Blok takes a more physical approach towards dealing with the enemy. Dream Girl coordinates attack strategies based upon the foreseeable outcome of events. Saturn Girl performs a wide-range mind scan and reveals the true reason behind the Corps' strange behavior. They are all under the mental dominance of the cosmic spore known as Starro. These star-shaped parasites are attached to the face of each infected member of the Green Lantern Corps. Brainiac 5 theorizes that the spores must have been using ring energy to cloak themselves from detection. Now knowing what he is truly up against, Superman begins using precision bursts of heat vision to burn the spores away, thus freeing the minds of each Corps member. Timber Wolf however, prefers a more predatory approach and attacks the Starros literally tooth and nail. Once all of the spores have been destroyed, the Green Lantern Corps members return to normal. Then Brainiac 5 remembers that all of the spores are under the control of a parent organism – "The Big Boss Star". The Starro progenitor descends from the sky ready to attack. Suddenly, Bouncing Boy soars down out of the clouds and rams the creature with the Legion star cruiser. With the threat alleviated the two teams of heroes become friends. The Green Lantern Corps members fly off cheering, "Long live the Legion!" The Legionnaires in turn, raise their fists in salute and shout "Long live the Green Lantern Corps!"

Retrieved from "https://heykidscomics.fandom.com/wiki/Legion_of_Super-Heroes_in_the_31st_Century_Vol_1_6?oldid=1439740"
Community content is available under CC-BY-SA unless otherwise noted.