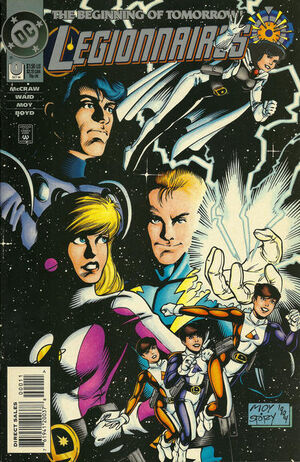 The Legion of Super-Heroes are unveiled to the United Planets council for the first time. Although they are initially met with skepticism and ill will, they quickly gain respect when Cosmic Boy, Saturn Girl and Live Wire are forced to prevent an attempted bombing of U.P. Headquarters, unbeknownst to them the same man behind the earlier attempted assassination of R.J. Brande.[1] The Legion also gains two new members when they are assisted by the triplicating Luornu Durgo, Brande's secretary, and the matter phasing Tinya Wazzo, daughter to one of the council members. Although they are unable to determine who sent the attempted killers to blow up the council, they are met with cheers in their first heroic outing.

The President of the U.P., Jeanne Chu, initiates a draft and begins pulling in new Legionnaires from different homeworlds in an attempt to increase the Legion's diplomatic capabilities. All over the galaxy, Science Police officers are sent to deliver messages to various chosen teenage representatives in the Legion, including Gim Allon, James Cullen, Jenni Ognats, Reep Daggle, Lyle Norg and Querl Dox.

Retrieved from "https://heykidscomics.fandom.com/wiki/Legionnaires_Vol_1_0?oldid=1501878"
Community content is available under CC-BY-SA unless otherwise noted.